Presented in association with MUMA

Life Inside an Image

Byrne plays with the idea of a camera being a medium between the truth and the illusion.

A museum is a frame that transforms its contents. It freezes them in time, fixing their meaning. But what if the museum itself becomes the subject?

Gerard Byrne’s newly commissioned Jielemeguvvie guvvie sjisjneli (Film inside an Image) 2015—16 is the central work in an international group exhibition where each artist turns their attention to the museum as a technology of capture and attempted control.

The rise of Irish artist Gerard Byrne has been as rapid as it is inevitable, with a growing oeuvre of works that turn history into an uncanny playground. Leaping nimbly across video, photography and installation, Byrne’s reconstructions of conversations between historic figures make strange their subjects while recasting past eras in an eerily artificial light.

Explore Byrne’s work and his influence on other artists across two exhibitions at iconic Melbourne institutions.

Join us before the official opening of Life inside an Image, to hear Rob Thorne (of Ngati Tumutumu), a Māori musician and anthropologist from Palmerston North, New Zealand, perform in the space with traditional Maori flutes and horns made from stone, bone, shell and wood.

Gerard Byrne’s Jielemeguvvie guvvie sjisjneli (Film inside an Image), 2015—16 is co-commissioned by the Mead Gallery, Warwick University, UK with Monash University Museum of Art, Melbourne and Moderna Museet, Stockholm and is supported by the Monash-Warwick Alliance.

Byrne plays with the idea of a camera being a medium between the truth and the illusion.

IF YOU'RE FEELING PECKISH... 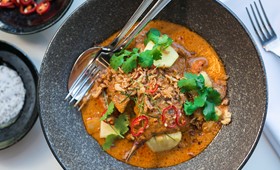 Whether it's an entree or an encore, stay nourished this Festival.

Check out our Festival Feasts

Add 3 or more eligible events to MY EVENTS and save 15% off your tickets when you purchase in a single transaction.

Adult A Reserve or General admission tickets must be selected to receive the discount.

Or, continue this single event booking.

Add 3 or more eligible events to MY EVENTS and save 15% off your Adult A Reserve or General Admission tickets when you purchase in a single transaction*.

Or, continue this single event booking.